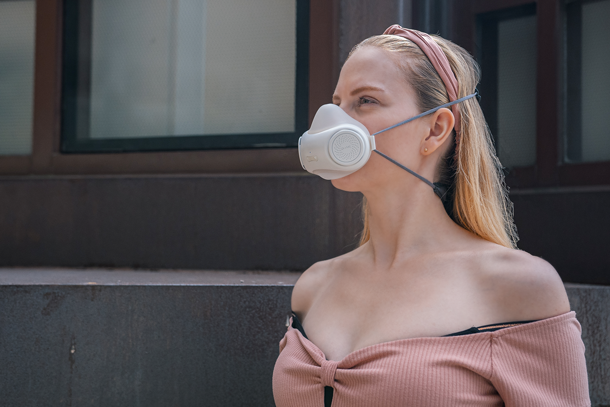 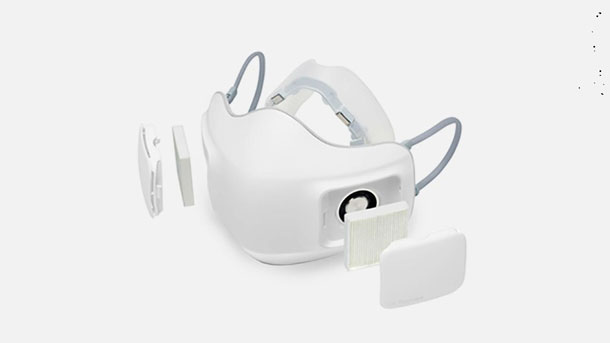 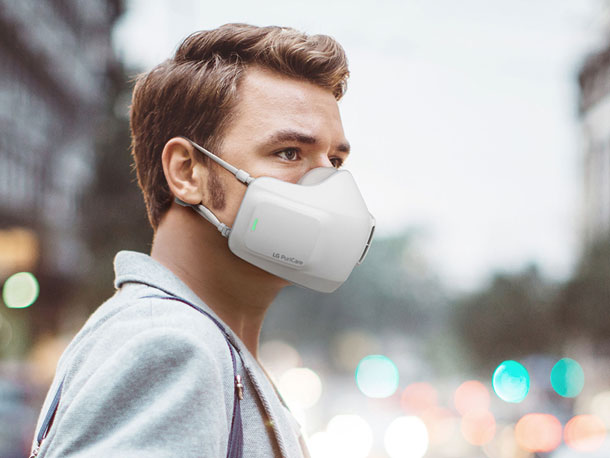 In today’s world, how we view and manage our health has completely changed within the last 2 years. The thing with rapid change is that there is no time to assess the effects and consequences of our actions in real-time. As a result, the information made available to the public will greatly vary from one source to another.

This is especially true when it comes to information about facemasks. People mention that facemasks are slowly becoming obsolete as vaccinations continue to roll out, but experts say you should tread carefully when hearing this.

Researchers state that even if you were to receive a vaccine, you are still vulnerable and are able to contract the virus within a two-week period after receiving a vaccination, rendering it ineffective.

So not only can you still get sick, but you can continue to spread the virus if you’re not careful. But trust us, we know… Wearing masks can get very annoying, especially when having to wear them over long periods. So the purME Air comes in from the left-field and seems to cover most of these bases, especially with safety, comfort, and breathability. Let’s put this wearable air purifier mask through our rigorous review and see if it holds up.

To start off, this mask looks much different from most high tech face masks you see out on the market. Its twin turbines give it a unique look that could either be cool or maybe a little off the wall. That aside, its technology is what’s to be highlighted here.

What’s with those turbines? They’re a little out there, but they’re supposedly for the incorporated “constant pressure technology” which is supposed to supply you with consistent air for maximum breathability. So the “hard to breathe problem”? If it works like a charm, consider it addressed.

Not only is it possibly the most breathable face mask, but it is also modular. How? You can choose and change your air filters. The option of having either HEPA filters or P100 filters is pretty cool, but what’s even better is that not only are these filters cleaning the air that comes in, but also the air that goes out. That’s double protection…

But what really caught me by surprise was its self-cleaning capability. It incorporates a unique UV-C light on the inside of the mask which supposedly disinfects the mask in a 5 minute period. This little feature in itself might be the wildcard that gets people to turn their heads.

Aside from all of that, with face straps specifically designed to wrap around your head and not your ears… it’s clear that this tech product is one that was THOUGHT THROUGH (as it is the second version). With turbines, UV-C self-cleaning, and overall design, purME Air definitely is one of the most innovative products out there.

Compared to other facemasks, this mask is heaven. I mean, you can actually work out in this mask which seems to be one of the biggest benefits for me. You no longer have to worry about a hot-moist medical mask, as the purME continually pumps air right into the mask, keeping condensation out, and fresh cool purified air in.

Compared to other air filtering masks, this has a great fit and doesn’t cover your whole face, which can be a definite plus and a definite minus – depending on what you’re looking for. One thing to consider here is that many backers have commented on their original version that the size could be bigger to also cover the chin. Whether that could be addressed in another version is yet to be seen.

One thing is for sure, it’s twin turbines that keep supply constant pressure is definitely a competitive advantage for them along with its self-sanitizing UV-C feature. When looking for competitors on Amazon, I could not find any non-knock-off competitors to an electric face mask that has 4 stars or over.

That being said, purME definitely seems to fill the void when it comes to being a high-quality wearable air purifier mask. It’s main competitor UVMask has positive airflow but it doesn’t filter the air coming in. So it seems here that purME has a slight edge, especially with its price, making it incredibly competitive in the market.

So to be straight with it, we’ve had the creators send us a purME so that we can give it a live in-person review. When will this go down? In the coming next few weeks. We’re excited to get down to the nitty-gritty and give you an unbiased TIW take on what this product really has to offer. Why are we saying this?

We were slightly confused, maybe a little concerned as it looks like the masks are photoshopped on the models of the Indiegogo page. Did they actually make the masks? Is this legit? Luckily to our relief, we received a fully functional product in the studio exactly as it was marketed. We also noticed that they also started shipping their first purME.

This raises the question once again, why the heck do they need to photoshop the mask onto models?

We were gonna put the rating down on this one but as we actually have received the mask and can confirm that backers from their last campaign got it, we’ll let this one slip as it has no basis for questioning.

The problem is, as seen in so many crowdfunding campaigns, many shipments seem to have failed. Many backers have never received their masks from the previous campaign — however, the ones that did seem generally happy about their purchase.

The team looks like a bunch of kids. Maybe they’re just a bunch of meddling kids and a dog solving a comfortable face mask mystery… In their about section, it just says: “Behind purME Air stands a group of designers and engineers interested in making a better reusable mask.”

It doesn’t give enough credibility – but yet the fact that they previously launched a semi-successful campaign with an actual product (the problem was shipping, not product development) helps me rest easy.

In this campaign, the purME team is pretty polite. The response rate is generally within a day (though sometimes 3), so no problems there. They respond to the comments pretty well, but there’s definitely not an extra “oomph” of heartfelt sauciness in there. 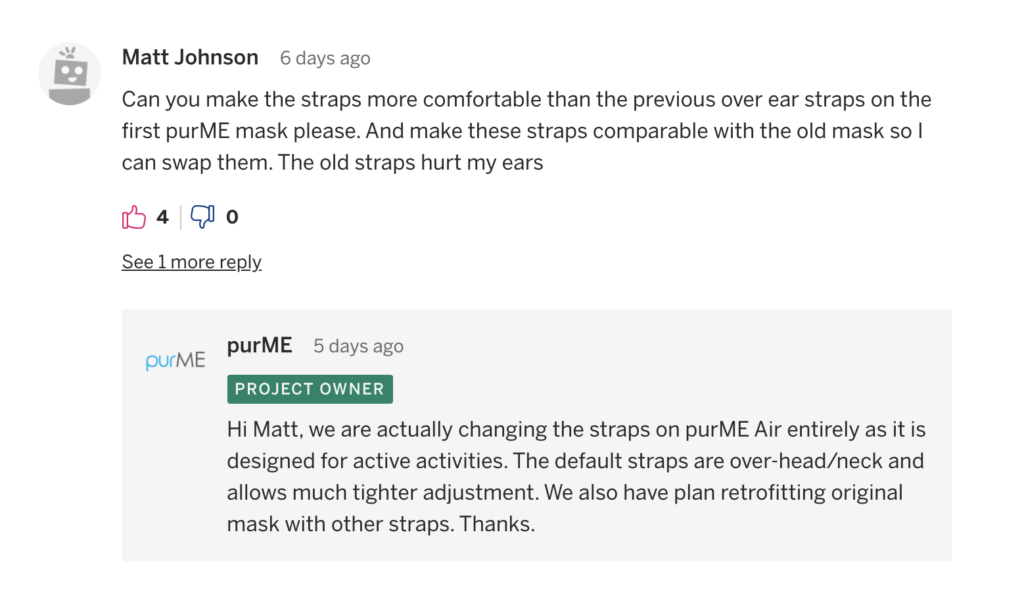 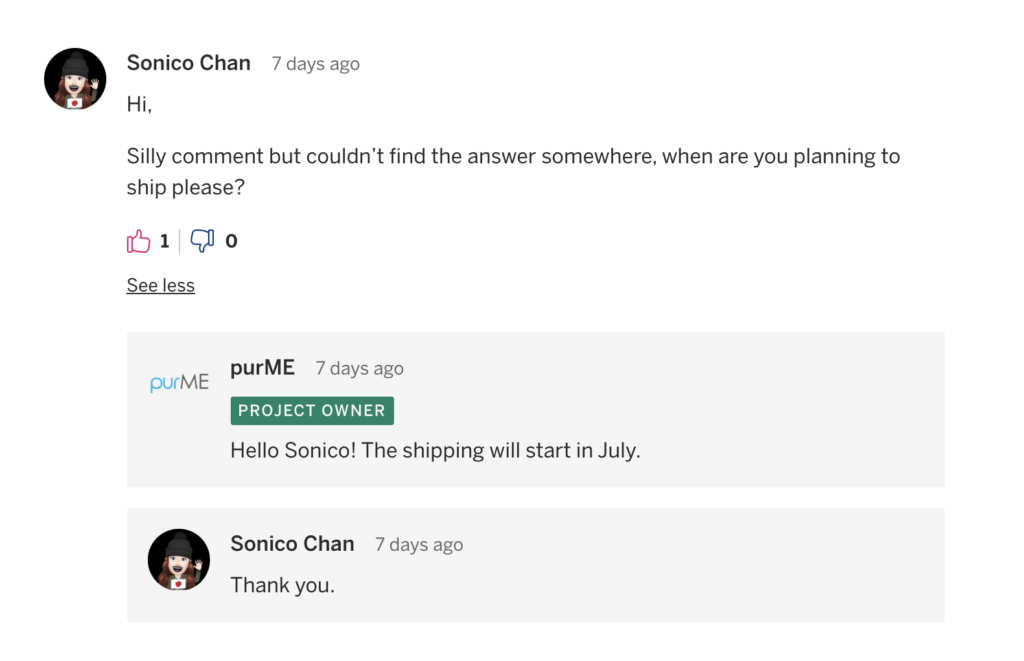 The thing is, the previous campaign doesn’t hold the same narrative.

The response rate is pretty quick but very spotty. How spotty? Just about half of the comments were addressed. And those that were addressed, were done in such a way that was slightly dismissive, especially those that involved negative comments about shipping problems.

So what’s the verdict? As a whole, this product is definitely cool, definitely innovative, and certainly addresses most dilemmas when it comes to face masks. It’s a comfortable face mask, probably the most breathable face mask that is solid enough to even wear when working out. It looks pretty cool, and it purifies the air you breathe and exhale…

The only thing is that they need some work when it comes to their PR. That isn’t a deal-breaker. But it is something to work on. If it was me, I’d definitely give it a shot and try it for myself. Might have to wait a bit for it to arrive, but if masks are mandatory at the gym, this is probably the air purifier mask that I’d be rocking. 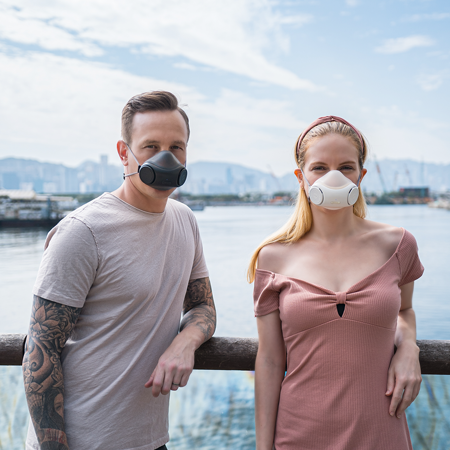